First photo is the battlelines closing (Greeks to the left). 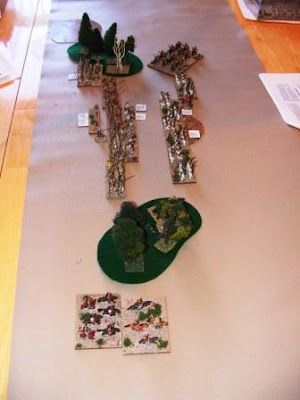 Second photo is the last turn.

Another game under the belt, and we are starting to get some of the depth of this little game. This battle had Romans trying to break the Greek center, before the Greek light cavalry could get around some bad ground and come in from the flank. Unfortunately the Greek cavalry was just too late (one turn).
Posted by Bill R at 7:31 PM 2 comments:

Played our first series of IMPETUS games this weekend

Two battles, Republican Roman vs. Gallic tribes, and Greek Hoplites vs Persians. Both turned out as might be expected, Greeks beating the Persians, and Romans on top of the Gauls.

The interesting part of these rules though, was the way the battles went. Romans withstood a big Gallic assault that fragmented coming in (three double deep impetuous warbands) and each ended up attacking individually (die rolls that added to normal movement during a charge is what fragmented the attacks), and the Romans were able to use adjoining support units to blunt each attack. Pilum throws had some effect but not overwhelming. Each Gallic unit threw 10 dice (4 for attack, 4 for impetus, and +2 for double deep formations). Romans by themselves get 6-dice back, but added +3 for each supporting unit.

One lucky instance was a 3-damage against one of my stands that luckily I caused 4-damage against the attack Gallic warband. Both rolled high, victory to the Romans.

Cavalry moved to the flanks and the battlelines definately were the determining factors in the first game.

Even with rule reviews we were over in less then 1.5 hours.

The game was enjoyed by all.

We then set up a second game with Greeks and Persians. The Greeks advanced on a broad front and as the Persians I had a horrible starting position, my cavalry kept getting disordered by some bowmen in a woods, my light infantry and levies got crunched by hoplites, and my mercenary hoplites got trapped behind a kardaces unit and was attacked in flank and front, but it was still fun to play and that game took less then an hour.

All in all, we are happy with the rules, and are going to play again next weekend with a few more folks.
Posted by Bill R at 5:25 PM No comments:

As I stated in an earlier post, I am building a IMPETUS Republican Roman army and really enjoying the process. I have moving around cardboard bases to get a hang of the rules, and like what I see so far. My son's gaming group is coming over in two weeks to begin our first ancients gaming... so I need to get the Macedonian/Greeks done now. 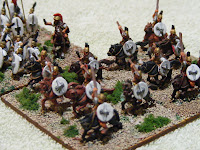 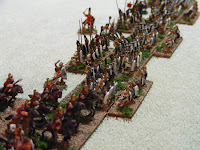 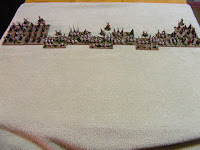 The army as it sits has 3-Roman Legions (12 stands), 2 Gallic cavalry stands, and 4 Roman cavalry stands. Officers, standards, and musicians are mounted individually. (2 Italian Legions are finished and almost completely mounted, this will allow me to use them as a Consular army (2-Roman, 2-Allied Legions).

The thing I liked about IMPETUS is the ability to fit any number of figures on a base, In my case, 6 Hastisi, 6-Princeps are on two of the bases, 4-velites on another, and finally 6-Triarri on the fourth stand (with some type of officer to balance out the stand.
I think it shows the Roman "checkboard" approach fairly well. I was going to increase the depth of the stands, but wanted to stay "legal" for the game, in case I play at a convention.
Posted by Bill R at 4:35 PM 2 comments: 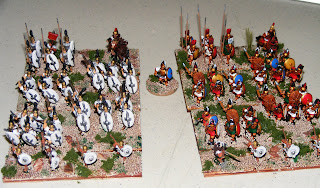 I have been very impressed by the IMPETUS rule set for quick, interesting games. I particularly like the larger stands being able to be more interesting then just sticking 3 or 4 figures on a smaller stand. Above is the first finished stands for the Republican Roman army.

Each Legion is made up of four stands, Hastisi, Princeps, Triari, and Velites. Since the first two (H and P) have the same game statistics I have included them on the same stand Hastisi in front and Princeps behind in the gaps. I wanted to show the maniple three lines approach of the Roman army of the time.

Although not exactly what I was going for, they do look more interesting then straight lines of figures I think.

Will post more when the next pair are done.
Posted by Bill R at 5:32 AM 3 comments:

First Time for everything I guess 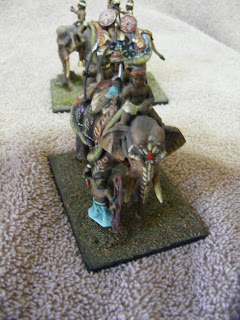 This blog will be for venting about politics, discussing my hobbies and family, and generally for anything I want to get off my chest.

I am 55-years old, in charge of a small manufacturing factory in Western Indiana (Terre Haute) and enjoy small pleasures. I paint, collect, and play games with military miniatures, and will be displaying some of these as I finish each set.

The photo of the ancient Indian war elephant is a good example of the type of figure I collect (although, I recently sold this one on e-bay).

I am currently working on a set of game rules to play a game simulating ancient battles. Working title is IMPACT and MELEE. The rules will be simple and quick to learn and allow for the use of figures mounted for other games to be used.

I intend to publish through www.LULU.com. 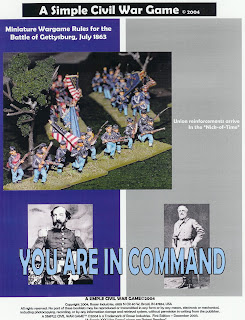 I currently have "A SIMPLE CIVIL WAR GAME" about Gettysburg available through them (in full color) that includes the game rules (16-pages), and Order of Battle for Gettysburg (32 pages) and 8-full color sheets of top down views of painted miniatures soldiers of the Civil War. Just copy these pages, cut out the playing pieces, and you can learn to play until you have miniatures painted.